In the article, “Amazon’s delivery may drop packages via Parachute” by Matt McFarland, the writer goes through the journey of Amazon’s decision in making the drones deliver the packages and the process of how the drone will deliver the package safely, without harming the public. In addition, the writer also mentions that the U.S. Patent and Trademark Office had granted Amazon a Patent for the manner of guiding the packages via drones to the customers safely. Furthermore, the patent also portrays a description of how the packages will be dropped using parachutes, spring coils, or magnets. Towards the end of the article, the writer had informed the readers that Amazon would not be able to launch the drone delivery in the United States and the reason being it is currently illegal to fly a drone without human supervision. The Competition continues in regards to the delivery through the assistance of drones because Google also declared ideas in relation to delivering packages. Moreover, what I find interesting about the article is that the idea of using drones to deliver the package.  Lastly, based on the article I feel like it is more Neutral rather than biased based on the script within the article.

Growing up in a big family can have both pros and cons to it, mostly pros. As a family, we really like to travel often, and throughout the years my family had branched out into different locations and eventually settled in. On the other hand, the only part of my family that continued to travel included my parents, sister, and myself. Our family culture falls of the branch of the Indian ethinicity, so our traditions mainly include family dinners during the holidays and etc. As a family of four we traveled through Boston, Washington D.C. , Nairobi, Virginia, and finally Joliet IL. Laslty, the journey of traveling more may continue further after Joliet or it may even end. 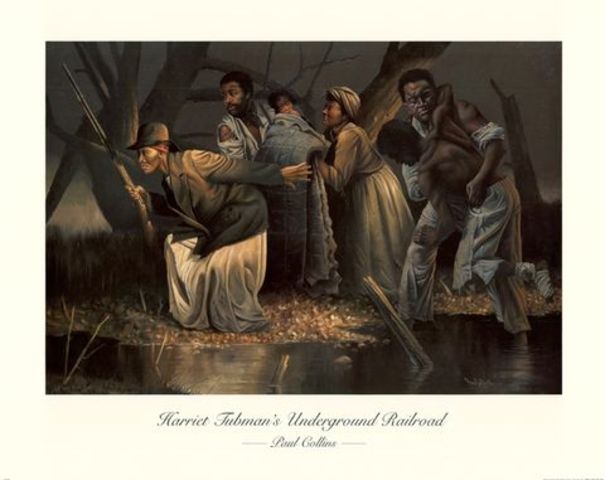 “Every great dream begins with a great dreamer. Always remember, you have within you the strength, the patience, and passion to reach for the stars to change the world.” (Harriet Tubman). Born on 1820, a former civil right activist, known as Harriet Tubman escaped slavery and became a heroic remembrance for the modern era. Secondly, Harriet Tubman was born into slavery and raised on Maryland’s Eastern Shore, in which there was a thin line between slavery and freedom. she managed to escape slavery and became the leading abolitionist while helping hundreds of slaves escape in the process. Throughout the night skies Harriet Tubman helped many slaves escape north, through the underground railroad system and since then she was known as the famous conductor of that specific era. Moreover, she was not only a hero for the slaves but also a spy for the Union Army during the war. Towards the end of the civil war, Harriet Tubman had spent the remainder of her life helping the elderly slaves and established her own home for the elderly. Interestingly, even though Harriet Tubman earned many names the most famous was “Moses” and the name was given to her specifically because Moses led his people to freedom in the bible while Harriet Tubman guarded the light of many slaves and led them to freedom. Lastly, Harriet Tubman had a hard life from the beginning but at last recognized as a legend in the eyes of many.

Throughout the speech presentation of Hope, in which she spoke from the perspective of a grieving mother who had lost her son Jesse, who had perished in the tragedy occurrence in Sandy Hook. while speaking to the audience Hope had soften her volume and yet raised her volume during certain moments of the speech while maintaining the suspense of the audience by keeping a emotional and helpful facial expression which helps the audience imagine how in reality, Jesse’s mother felt in regards of his loss. The movements during the speech presentation were helpful because it kept the audience more interested instead of losing interest in the speech, even though the speech was really engaging and full of emotions. The speech was well performed and did tell a true story, making the message more clear for the audience. My advice would be to perform like you’re performing currently, with passion and strong emotions towards the topic of the speech. On the other hand, a speech presentation called “Widow’s Walk”, relating to the events that occurred during september 11, and in which a wife had lost her husband. While performing the speech of “Widow’s Walk” the use of voice was really dramatic and therefore expressing the emotions of the individuals who lost their loved ones, including the wife who had lost her husband. Meanwhile, the facial expressions could have been more dramatic in order for the speech to sound more better. The speech presentation was interesting and the movements included while performing the speech were also really helpful in creating the dramatic effect. The goal of setting a clear message accross the audience was accomplished and so my advice would be to improve upon the use of more facial expressions throughout the speech performance but otherwise the speech was really well done and did attract the audience’s attention. Lastly, both of the speech presentations were really well done and as well as performed, while maintaining a proper emotional stance in regards of the topic.

My top three favorite super bowl commercials include the 2017 Kia Commercial, the Airbnb commercial, and the Google home Commercial. First of all, the purpose of the 2017 Kia commercial was to persuade the audience to purchase the 2017 Kia Niro while reaching out to the adults and young teens interested in purchasing a vehicle, but it was not intented for kids and young pre teens. The commercial sent a message throughout the society in multi perspectives by stating and comparing an individual who is taking part life threatening tasks to protect the environment but instead they could simply save fuel and use all of it’s power in a more efficient way by purchasing a Kia Niro, the most fuel efficient crossover. on the other hand, the Airbnb Commercial had sent the message of acceptance to the viewing audience such as adults and teenagers by attracting the audience’s attention by using civilians who have different ethnicities and cultures to better guide Airbnb’s  main message regarding acceptance. another reason why Airbnb was one of my favorite commercials during the super bowl was because it was more unique and the commercial had a story to it and a strong message without the use of voice. further ahead into the super bowl, the google home commercial was another one of my 3 favorite commercials due to the the different aspects of the commercial. Also, the purpose of the advertisement  was to promote the Google Home gadget and to persuade the public to purchase the device. Lastly, during the commercial the use of different family events among the life of various individuals had made the commercial more realistic and made the audience more attracted to the thought of buying the Google Home device and in doing so the purpose of reaching out to adults and teens had been fulfilled.

In recent discussions of  Concealed Weapons  , a controversial issue has been whether to allow the use of concealed weapons or prevent them from being used throughout the population.  On the one hand, some argue that Concealed weapons can cause more harm than good to the nation. From this perspective, the society would be less involved in violence. On the other hand, however, others argue that arming themselves with a concealed weapon would keep them and the people around them safe during dangerous situations.  In the words of one of this views, main supporters, “If you believe in the right to life, then you must believe in the right to have the means to defend that life” (Charley Reese). According to this view, in order for you to live your life and live it with your loved ones, you must defend yourself and your family .  In sum, then, the issue is whether , Carry a Concealed weapon with a permit for a better and guarded life  or to decrease the violence in the society by not carrying a weapon. My own view is that one can only protect themselves or their loved ones by either a strong will or with an object or a weapon to company them in regards to guard their family.  Though, I concede that in some situations it would be best to prevent further violence by not carrying or using violence to solve a problem, I still maintain that obtaining a concealed weapon with a permit would be an advantage during dangerous occurrences in one’s life. For example, an event which can take place at any time in life without concerning the individual,  such as school shootings, Mall outbreaks, and violent outbreaks. Although some might object that Violence isn’t always the best answer during other violent situations. I reply that it depends on the situation in which negativity is taking part in and the amount of people your putting at risk by making that one decision which is whether to talk it out or to take action. The issue is important because, First of all, it can either give you a heroic memory to remember in the future or make you a victim of violence. Secondly, at times it may depend on your surroundings, whether or not to take the action using violence or a more peaceful method of talking it out. lastly, based on the facts the 2nd amendment, which, has stated that the people have the right to use a firearm for protection and protection only.

For further research and to make my argument stronger, would you have any links, videos, or any source to recommend ?

The Green Rose which i made during the time in which my classmates and I were assigned a task of using our creativity to produce a creation which represents  a story, personality, character, or current lifestyle. Secondly, the Green rose is important to me because it represents my current lifestyle. Moreover, One can say and have many perspectives behind the meaning of the Green (turquoise) Rose, Such as richness, purity, abundance, and bounty. Furthermore, the meaning behind my creation of the rose is balance, respect, life force, and rejuvenation of spirit. My classmates had also created their own symbolized representations from the use of play-doh. Each  play-doh creation has it’s own and special meaning to it such as the mysterious Black Rose, an authentic swimmer, and a unique slice of Blue pizza. Further ahead, while creating play-doh figures might sound a tad bit odd in an high school level english 2 class, there is more to the task than it may seem. The task itself has many purposes to it, like, creativity, purpose, explanation, and conducting the task in the given time. this relates to writing by challenging the pupils to explain their creation in detailed writing and showing how they can stretch a small story into a well explained paragraph. while it may be harder than it seems it would test an individual’s ability to write and use all of the details which had occurred in life into writing. Lastly, the assignment was not only fun but it was also educational, and artistic.